Sitting underneath a blue tent, shaded from the blazing summer sun on a nearly 100-degree day, Centennial mom Francesca Sivadhas held her 1-year-old daughter, Lakshmi, as her husband returned from getting his third beer sampling during Centennial’s annual “Brew-N-Que” event at Centennial Center Park on July 9.

Having just moved to Centennial from London about three months ago, Sivadhas, who lives down the road from the park, was searching online for events to attend and came across the Brew-N-Que. She came with her family and a few other friends.

“It’s fun! Yeah, we’re enjoying it,” Sivadhas said. She asked her husband, Harry Sivadhas, how the beer was, since she is pregnant and can’t drink. He said the beer was good and he only wishes the event had more non-alcoholic choices.

An estimated 1,000 people attended the “Brew-N-Que”, which invites people to gather and enjoy barbeque and beers, said Centennial communications director Allison Wittern. The event began as a way to bring people together at the park, she said, adding this year marked the sixth time Centennial hosted it. 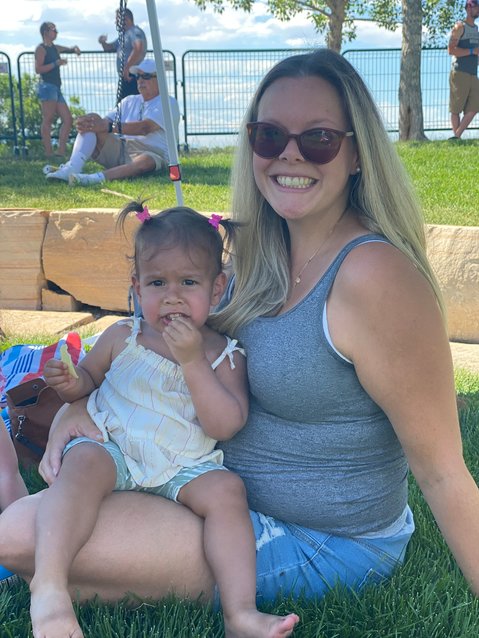 Centennial mom Francesca Sivadhas sat in the shade as she held her 1-year-old daughter, Lakshmi, on July 9, 2022, at Centennial Center Park. 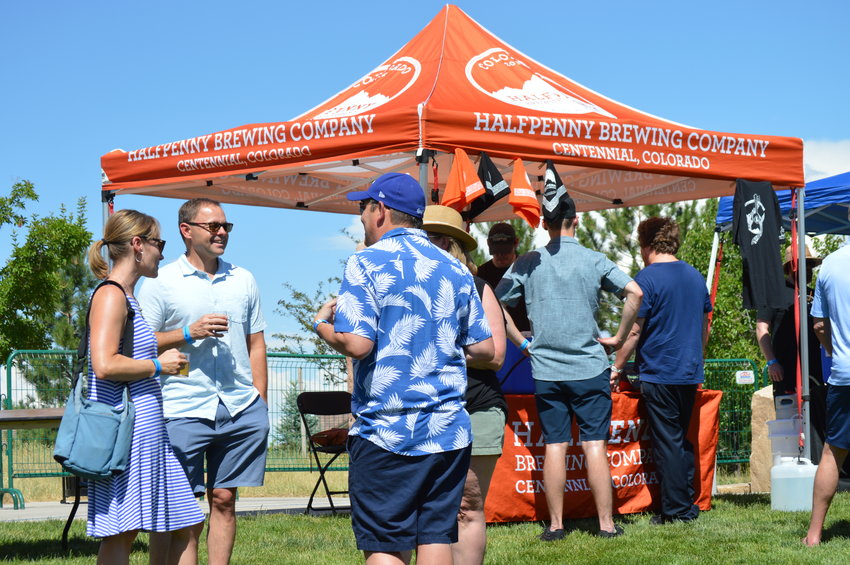 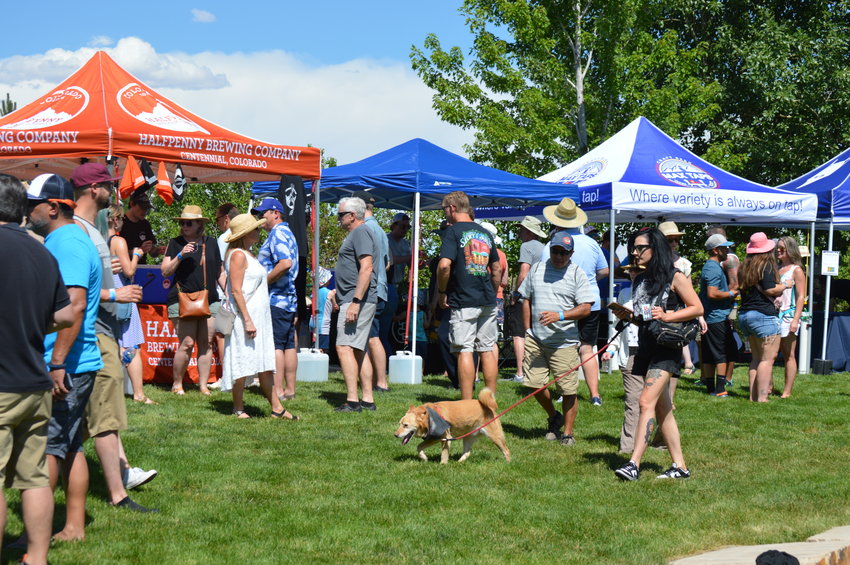 People who purchased a beer sampling ticket could get a 3-ounce sample from 10 of the 12 breweries with tents scattered across the amphitheater lawn on July 9, 2022, at Centennial Center Park. 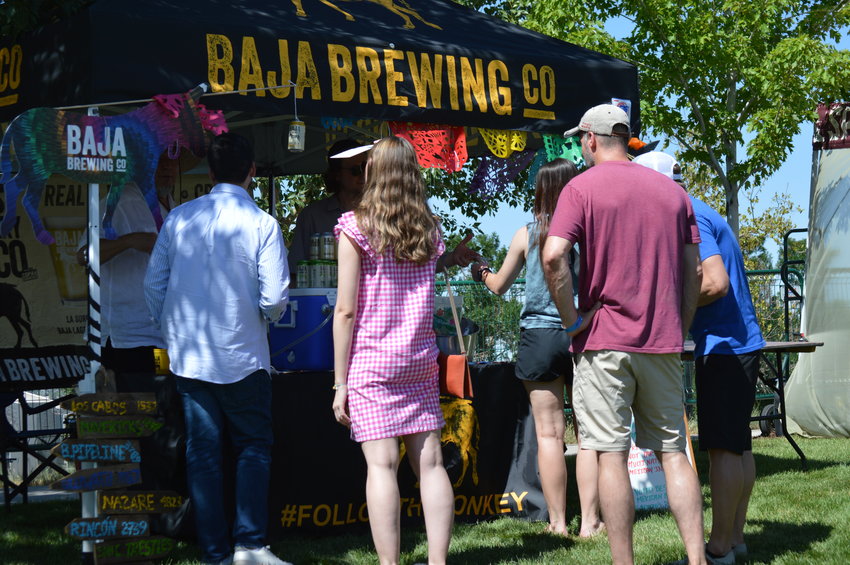 People waiting to get a beer sample as part of Centennial’s annual “Brew-N-Que” event on July 9, 2022, at Centennial Center Park. 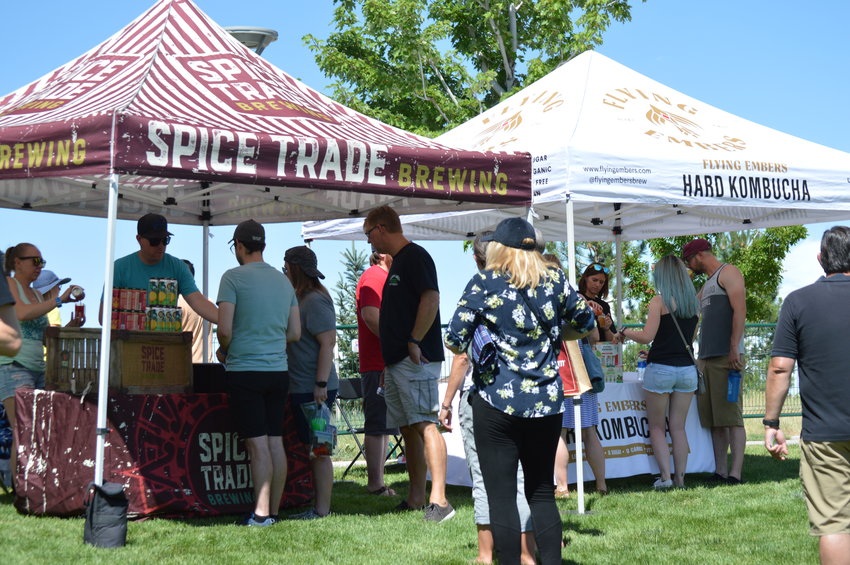 People waiting to get one of their samples of alcohol during Centennial’s annual “Brew-N-Que” event on July 9, 2022, at Centennial Center Park. 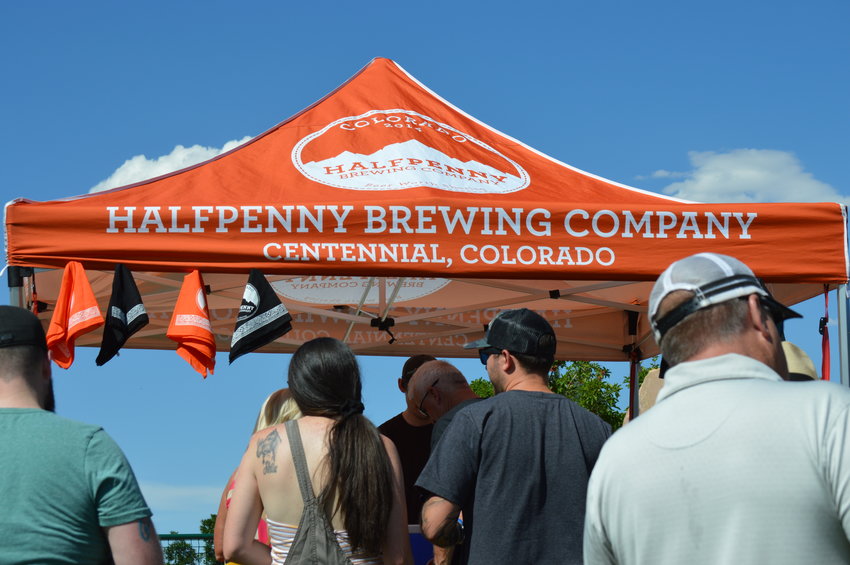 One of the breweries at the "Brew-N-Que" event on July 9, 2022, at Centennial Center Park was Halfpenny Brewing Company, which is based in Centennial. 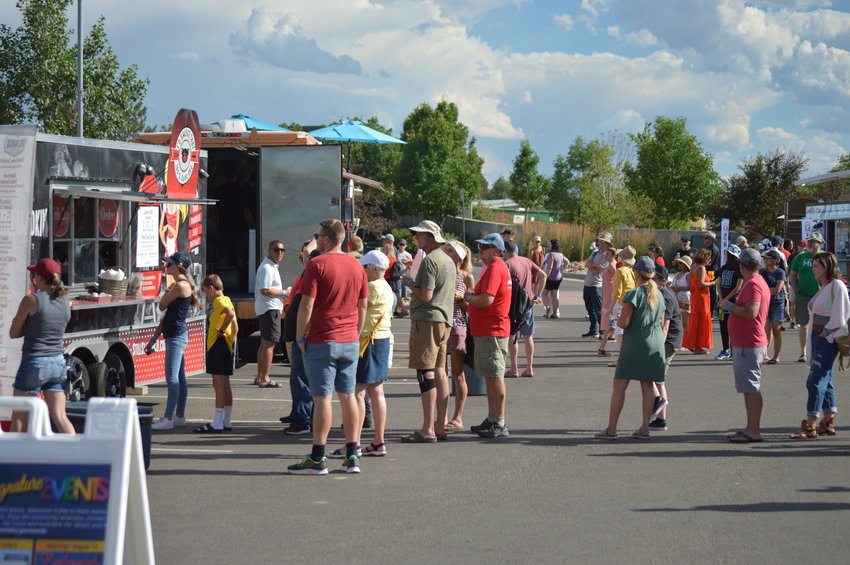 Part of the parking lot at Centennial Center Park was used to host tents and food trucks during Centennial's annual "Brew-N-Que" event July 9, 2022. 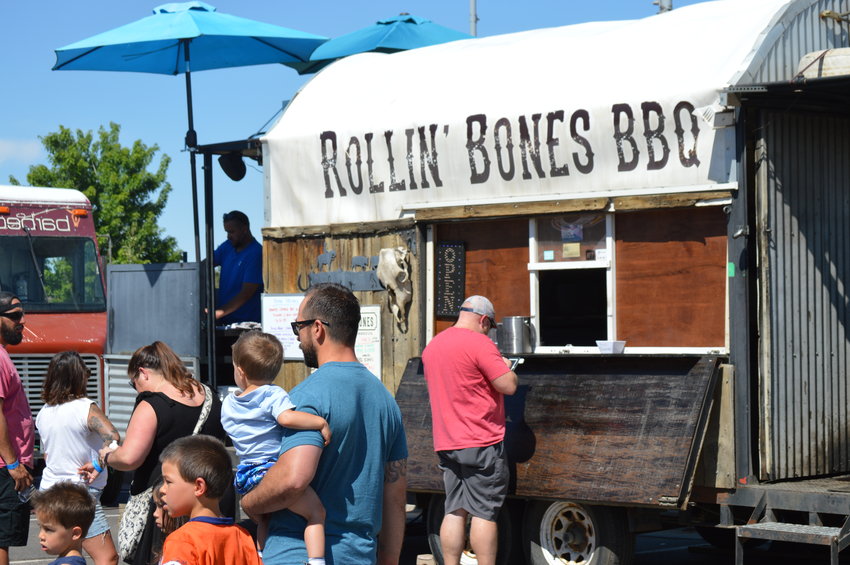 One of the three barbeque vendors at Centennial's annual "Brew-N-Que" event on July 9, 2022, was Rollin' Bones BBQ, which attends various events throughout Colorado. 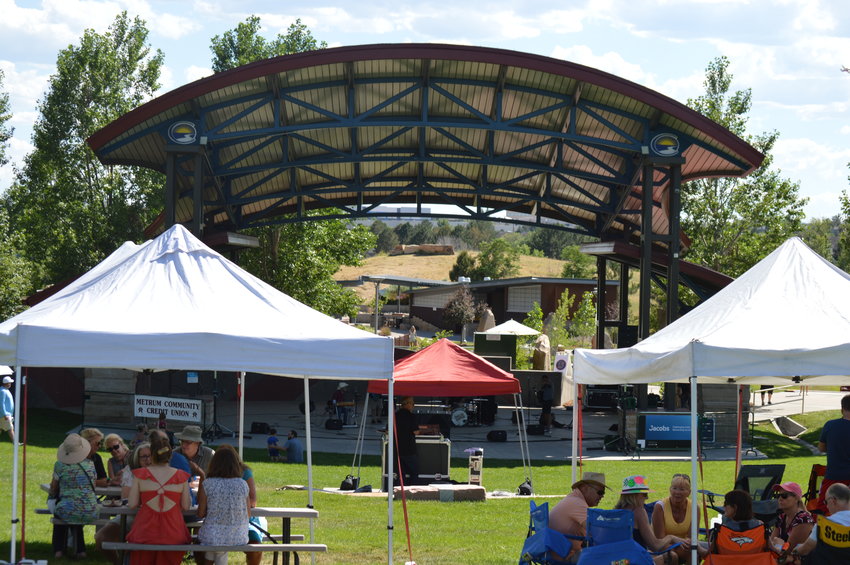 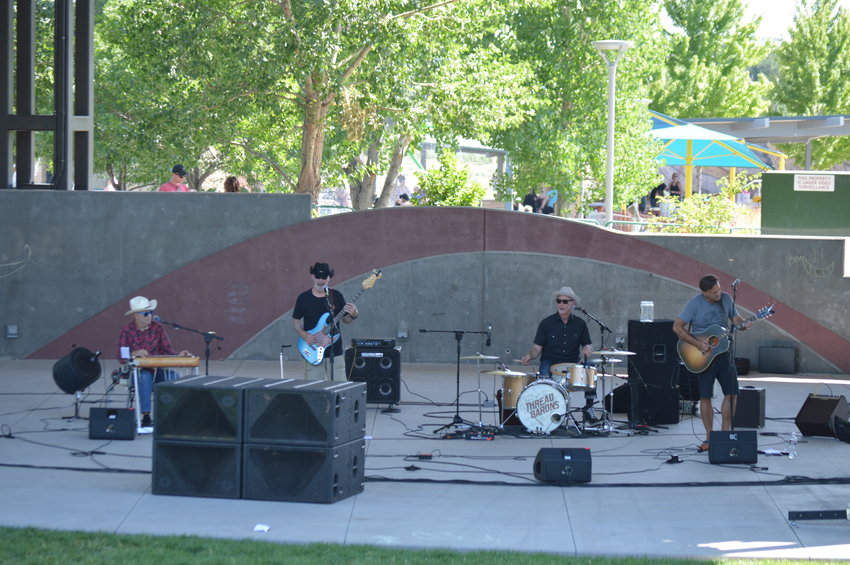 The ThreadBarons were the first band to take the stage at Centennial's annual "Brew-N-Que" on July 9, 2022, in Centennial Center Park. 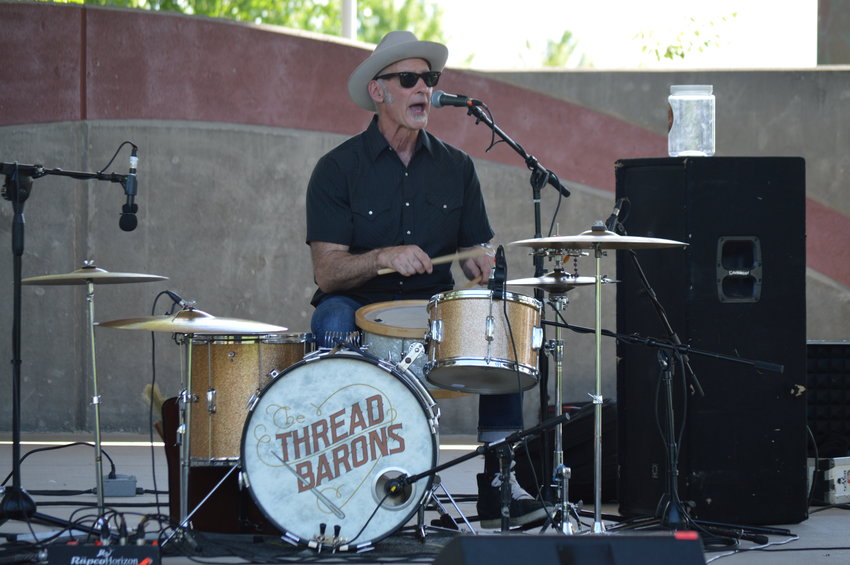 One of the members of The ThreadBarons performing during Centennial's "Brew-N-Que" event on July 9, 2022, in Centennial Center Park.
Previous Next

Those who purchased a beer sampling ticket could get a 3-ounce sample from 10 of the 12 breweries scattered across the amphitheater lawn, including the Centennial-based Halfpenny Brewing Company.

Live musical performances on the amphitheater stage, first by The ThreadBarons and then by the Front Range band, filled the atmosphere throughout the evening.

In the parking lot near the entrance to the ampitheatre, lines of people formed in front of the three available barbeque vendors. Tents with representatives from various organizations, such as Metrum Community Credit Union and The Trails Recreation Center, also filled part of the parking lot. Representatives for Heidi Ganahl, who is running for governor, were also at the event.

Centennial also hosted a tent for its housing study, asking residents to offer their thoughts on inclusionary zoning and accessory dwelling units. The effort is one of the ways the city is trying to get more participation in its housing study, which city council member Candace Moon previously said needs more community feedback. 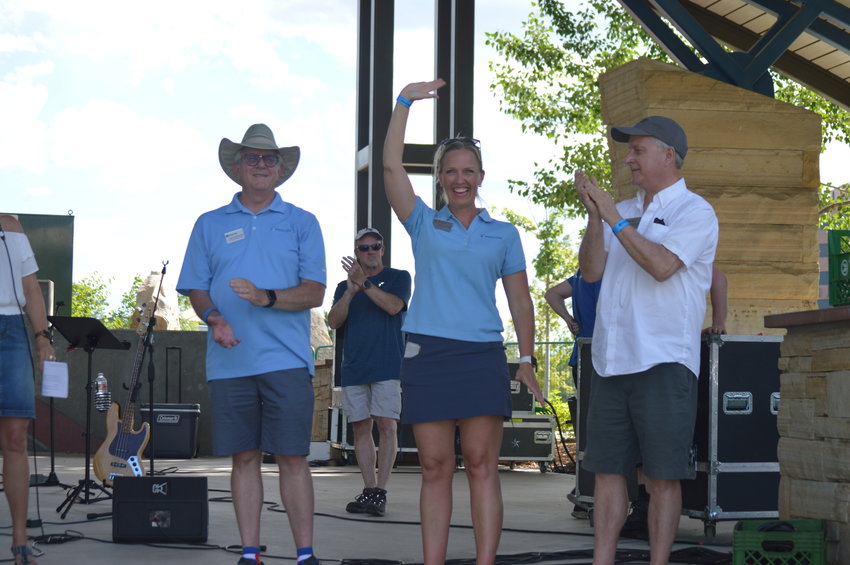 Mayor Stephanie Piko introduced the five other members of city council who were present at the “Brew-N-Que” event on July 9, 2022, at Centennial Center Park. From left to right: Mike Sutherland, Robyn Carnes and Don Sheehan. “We did manage to pick the hottest day of the year for this event, so we hope you are all enjoying the nice cold brews, some great barbeque and finding a little bit of shade and a little bit of a breeze to hide in this afternoon,” said Piko. “Thank you all for being here.”

For those who attended the event, Wittern said she hopes they had a good time, met with neighbors and gained a sense of pride in Centennial.

“This is one of our favorite events,” Piko said. “We hope you enjoy this opportunity for everyone to get together and have a great time in the sun in Colorado, and enjoy it in Centennial.”

Graduation under the golden arches

Multi-county police chase ends in Douglas
A car chase on Interstate-25 ended with the Douglas County Sheriff’s Office arresting a Pueblo man on multiple counts, including eluding police and kidnapping. Around 10:20 p.m. Dec. 6, …

Weed whacking Colorado’s ozone problems
Standing on a leaf-strewn lawn at Sloan’s Lake Park early on a sunny December day, Jordan Champalou says cutting ozone by switching to cleaner engines is as easy as pressing a button. And then he …

FEC United encourages members to attend equity meeting in Douglas County schools
A call to action from FEC United, a conservative Colorado group known for having a militia, has the Douglas County School District reinforcing security for its upcoming Equity Advisory Council meeting.

Old motels put dent in homelessness crisis
Denver’s five-year plan to reduce by half the number of people who are homeless and living outdoors relies on a relatively new strategy — buying up old motels and converting them into housing.  …

After month of free fares, many riders stayed with RTD
After Colorado offered $28 million to make public transit free for the month of August — in an effort to ease air pollution when ozone levels are highest — many riders stayed, even after fares …